So another week has passed so it must be time for another blog entry.

On the writing front, I’ve been working on trying to nail down some ideas on the Arthur Mace series. I seem to keep getting bogged down when I try writing more stories. Hoping that the work I’m doing will break the mental log jam. I’ve also got several other series in mind so the work I’m doing now will hopefully be applicable to them too.

On the entertainment front, I watched Shazam! recently. It had some fun parts, and an OK plot, but overall it just couldn’t seem to gel. Zach Levi did well portraying a kid who gained superpowers and is now stuck in an adult body. Sort of like  Big, with superpowers. Mark Strong did well as the villain, Dr. Sivanna, but he usually does very well playing villains. No surprise there.

OK, OK, I know. You just came to this post for the puppy pictures.

Here’s Major Tom, an eight-month old American Eskimo belonging to a friend of mine. We were on a road trip and he decided he had to be between us. Isn’t he just adorable when he’s asleep? 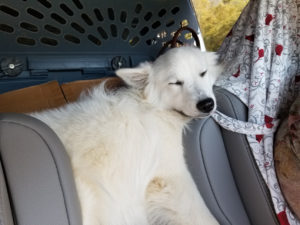 Times when he’s asleep and adorable are few and far between. Here’s what he is usually like: 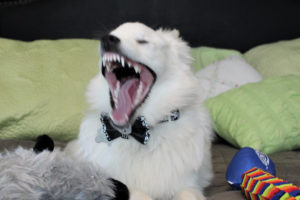 All teeth and chewing on things. We think he’s part dog, part alligator, part kangaroo, and part several other animals. The other dogs tolerate him as he seems to think they are interactive chew toys.